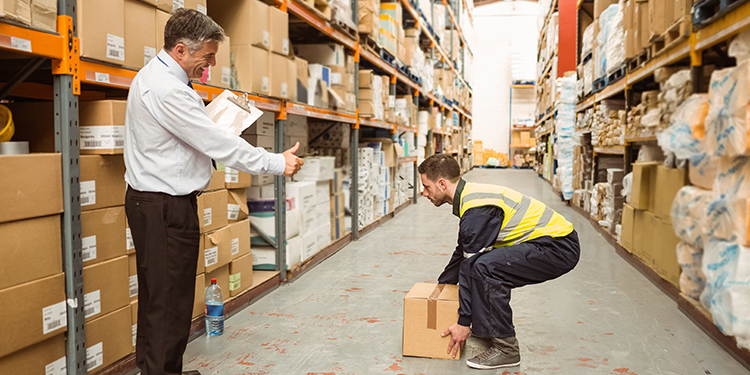 Wearable devices are quickly creeping into all aspects of our lives. From smart watches to smart glasses, and even fitness tracker and pedometer apps on the smart phones in our pockets, wearables are tracking our location, the distance we travel, our speed and more. So, it’s no surprise that there are an increasing number of emerging industrial wearable devices — including belts, tags, watches, clips and more — offered to companies seeking to improve the ergonomics and safety of their manual material handling workforce.

These industrial wearable devices are marketed as capturing data that can help an operation determine unsafe movements that are prone to higher risks of injury. They might also be used to help insurance underwriters gain a better understanding of a company’s potential ergonomic risks. Further, they could be used to help company management determine which among their multiple manual handling processes might benefit from the addition of ergonomic assist equipment.

The companies that have used these wearable devices, however, have discovered that the current generation of this technology still has some limitations, said Brock Anderson, owner and principal ergonomist at Ergo-ology. “Many organizations that I have worked with who have implemented these wearables tell me that the information that was gathered either didn’t seem correct, or the data collected simply confirmed something they already knew,” he explained.

Anderson shared two examples. In one situation, 30 employees at a beverage distribution center were assigned to each wear a device that was purportedly capable of detecting unsafe lifts. After a day, the collected data showed that wearers performed as many 600 unsafe lifts. However, two of the workers later confessed that they didn’t wear the devices that day. Instead, they put them in the cupholders of their trucks; the device was documenting vibrations from the vehicles because it could not distinguish whether it was on a person or not.

At another operation, a company invested $50,000 in wearable technology as a means to better understand which movements were causing the most injuries. “I pointed out to them that they already knew that information,” he explained. “While they agreed with me that manual material handling was the number one cause of their injuries, they hoped that the device would capture what employees were doing when they were lifting.”

The problem, continued Anderson, was that although the device did collect data about how many awkward positions the wearer experienced, there was no context. “The company realized that the wearable did not provide any documentation about what the task was that prompted this awkward posture, so they therefore did not know what to correct,” he said.

“The reality is, a standard risk assessment during which a person watches an employee at work and makes note of the task at hand during the movement — just like ergonomists have been doing for the past two decades — is still the best way to align the task with the data in order to get valid information,” added Anderson.

Even when combining observation with data collected from a wearable device, there is often a huge discrepancy between the level of risk noted by the Ergonomist relative to the wearable, he continued.

“An ergonomist can simultaneously consider multiple inputs — posture, exertion, repetition, and so on such as force, when performing a risk assessment,” said Anderson. “Conversely, the vast majority of wearable devices in the market are only able to capture one type of information, posture.”

“The accelerometers within the wearables really aren’t quite dialed in, nor have they been validated by research studies. More academics in this field are performing research on the devices, however, and are looking for companies to work with in this area of ergonomics,” he said.

One benefit of outfitting employees with wearable devices is that the wearers may be more cognizant of their postures and movement while handling loads, adds Anderson. “There’s a psycho-social aspect of wearing something on the arm or around the waist that can change a person’s behavior. It’s a physical reminder that they should follow their training,” he explained. “It can also send a strong message to employees that the company does prioritize their safety and wellbeing.”

Companies considering wearable technologies for ergonomic assessments should first decide what type of information they are hoping to get from them, he advised. Most probably already have injury data, but if a device captures information that the operation does not currently have about their workforce ergonomics, it could contribute to a better view of their risk.

“At this point in time, I would caution operations not to mistake these wearable devices as a solution to their ergonomic challenges,” Anderson concluded. “They are only a tool that provides an additional data input. But in and of themselves they do not mitigate the risk of injury. That’s where engineering controls, such as assist equipment, come into play.”

Looking for more ideas for improving the safety and efficiency of your workforce? The members of the Ergonomic Assist Systems & Equipment (EASE) Industry Group of MHI are available to consult, answer questions and make recommendations.

How To Plan Facility Guarding That Accommodates ...