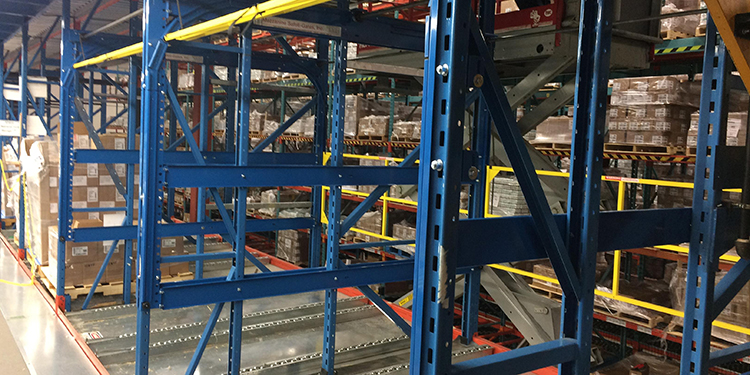 Working in pick modules or shelving within rack-supported platforms, associates can be three to four levels above the floor — vastly higher than the Occupational Safety and Health Administration (OSHA) Standard 1910.29 requirement for fall protection of any opening higher than 48 inches off the ground. And, while all pick modules have guarding around the majority of the sides due to the rack structure itself, there is the potential for some areas to remain either not guarded, or inadequately guarded, increasing the risk of a worker or a product falling to the floor below.

One such area at high risk for falls is where pallets are picked by hand or where empty pallets or empty totes are stacked to be returned. These positions are typically located in elevated rack bays where the rack beams have been raised or removed to create an opening at the ledge at each pick module level where pallets of product for workers to pick from are delivered by forklift.

To permit access, yet still protect the opening, some systems rely on removable guarding (handrails), chains, or a single gate that swings on hinges to one side or the other. However, an associate still has to approach the edge to remove, replace, open or close the device — or, during the course of a busy day, he or she forget to return the device to its secure position — raising the potential for a fall. Additionally, a single gate may be held in the open position by a pallet, preventing it from being closed and exposing a worker who may be picking in proximity to the opening.

As an alternative to removable guarding, chains or single gates, a dual gate system can be deployed. These systems are designed with two interconnected protective barriers — one at the ledge opening where pallets are placed, the other at the associate side of the pick module — that pivot overhead to raise and lower in tandem. That is, when one side of the gate is down, obstructing access to the pallet opening, the other side is up to permit access. This prevents a worker from entering an open bay when pallets are being loaded; conversely, it stops a forklift from placing pallets on the ledge when workers are picking within the area.

Constructed either as a single-piece, welded unit, or as two separate gates that slide up and down on a rail, dual gate systems create both a visual and physical barrier. They can be installed at any access opening in a pick module, including at pallet bays, multi-deep pallet flow lane openings, and empty pallet return areas. Additionally, the gates are constructed to bolt into the beam connector openings in the rack columns for an optimal fit that maximizes the access opening. Operation options include manual (push/pull), semi-automatic (push button) or fully automated (triggered by sensors). In addition to protecting personnel from falls, the gate openings can also be covered with solid panels, netting or wire mesh to prevent any products from toppling over the ledge.

For pick modules in higher volume operations, facilities often opt for multi-deep pallet flow lanes to hold as many as four pallets of product resting atop rails with rollers. This allows associates to pick from more than one pallet at a time, and to quickly replenish pallet pick faces with the loads queued behind — increasing overall throughput. Some pick modules lack decking underneath these rails, however, creating an opening in the floor that personnel or product can fall through. To eliminate the risk of such a fall, any openings in the floor under the pallet flow rails should be securely decked over.

Further, any openings on the aisle-side ledge that permit forklifts to place pallet loads should also be guarded. There are two ways to protect these openings: dual gate barriers (as described previously), or with a set of double-sided swinging gates of equal width that meet in the middle. These gates are bolted into the rack’s columns on either side of the access point and swing inward when pushed by the pallet. The barriers remain open as long as they are blocked by the pallet; they swing shut once the pallet clears the gates. To prevent product or personnel from falling through any openings in the gates, they should be specified with either solid or mesh panels.

When to Install Protective Barriers

The ideal — and most cost-effective — time to incorporate an overhead-pivoting dual gate system or double-sided swinging gates is during the pick module design phase. Doing so ensures the placement of these devices is not impeded by overhead obstacles, such as conduit, sprinklers, building columns, conveyor and more. However, both barrier systems may be retrofitted into an existing pick module.

Want more information about the different ways to protect employees from falls at heights? The members of the Protective Guarding Manufacturers Association (ProGMA) offer a list of Frequently Asked Questions (FAQs), here.

Easing The Pain Of Worker Strain In ...

Taking The Guesswork Out Of Lifting And ...